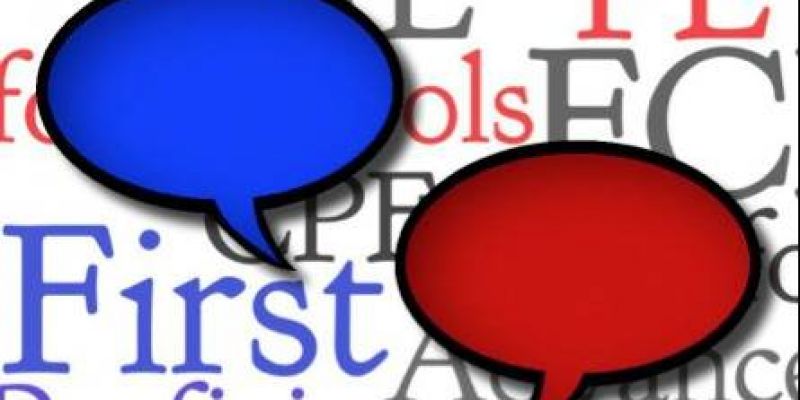 Speaking Test Evaluation -- 1) First watch the videos of Ottavia and Hannah doing the FCE Speaking exam and, where appropriate, comment on their


2) What global mark would you give the candidates?

3) Compare your notes with the examiners notes under the video.

4) How does your speaking compare to Ottavia and Hanna’s’? What do you do well and what do you have to improve?

Grammar and Vocabulary
Both candidates use structures well, for example, the dependent preposition ´without being´ gerund+preposition in the sentence ´without being on a plane´.
Also, while there is some repetition in the answers to the questions, what do you like about where you live?, with both candidates repeating the same ideas, the vocabulary used is appropriate, and where errors occur, they are corrected immediately: ´I do tennis, I play tennis´, or the word ´custom´ instead of ´habit´.

Discourse Management
First candidate produces a good introduction to the two photos, develops good ideas about the content of the photos, uses language of speculation, comparison and contrast.
The candidate fully answers both parts of the question: comparing and contrasting and commenting on why people are communicating in these ways.

The second candidate successfully introduces the content of the two photos, speaks fully and clearly about both photos and succeeds in answering both parts of the question.

Pronunciation
Both candidates speak very clearly and produce only very minimal errors which do not impede comprehension.
Burfdays for birthdays, larthing for laughing, filling for feeling.
The difficult word ´talking´ is pronounced correctly

Grammar and Vocabulary
The first student speaks clearly, giving answers which are extended and using complicated structures to express ideas:
They´re larthing but maybe not for the same reason´ ´ they seem really interested in what they´re saying´.
The second student refers to ´on the photos´repeatedly, but otherwise makes lots of excellent comments:
´They might find difficult to deal with the speed´, ´balance on the ski´, ´They might find difficult to put the right amounts of ingredients in the bowls´.

Interactive Communication
While one student appears to dominate, when the other student comments her remarks are made in complex language, explaining her ideas fully and contributing to the conversation confidently.

Discourse Management
The students successfully answer both parts of the question, discussing easily, using language to negotiate, agree and disagree, particularly the quieter of the two students who uses a lot of expressions to communicate with her more dominant partner: ´that´s also true´, ´maybe ´, ´but don´t you think…´.

Grammar and Vocabulary
Both students easily use language of speculation and modal verb structures: ´it could show you how the history evolved and how it get to this point´, ´I think that going to a football match is not so useful because you only look at people throwing a ball´.
While there is some repetition, ´useful´ for example because of its use in the question, there are also surprising quantities of quite elaborate language: ´inhabitants´, ´evolved´ and ´culture´ for example.

The candidates in part 4 successfully maintain an interesting conversation without hesitating, and are obviously listening to each other, easily responding to each other´s comments and opinions. The examiner only needs to ask a small number of questions because candidates are quick to respond and demonstrate confidence in their answers. A very impressive part 4.